Renowned comic and storyboard artist Tim Eldred has posted a couple of neat pictures to his Instagram. They feature concept sketch work that he did for Wing Commander Academy before the show was made. These were done early in his professional life and ended up influencing the rest of his career. The first shot shows several Confed fighters, including the Arrow and Hellcat that only ended up being featured in the first episode. At this point in development, the idea was that the TV series would primarily feature the cast of WC3 during their Academy years. This leads into the second sketch of the team as pilots, and this includes a young Flint instead of Archer! Very cool. Mr. Eldred is also working on a new graphic sci-fi novel series, Pitsberg, that you can find online here. 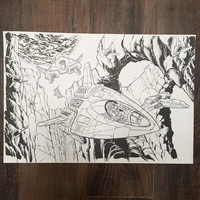 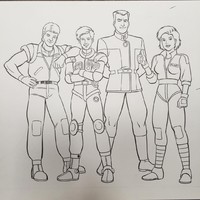