The second ship in our rotation is the one you're most likely to have noticed: Wing Commander III's Hellcat V-class Medium Fighter appears as the 'computer simulated' fighter at the beginning of Episode 1, "Red and Blue". The Academy Hellcat seems to mount two forward lasers and a pair of missile in racks under its fuselage. Because a Hellcat statue is also visible at the Flight School, some have speculated that these fighters may in fact be the Wildcats introduced in Action Stations -- echoing the World War II similarity between the F4F Wildcat and the F6F Hellcat. It is believed that the Hellcat V has been retired by 2681: the Wing Commander Prophecy Official Guide describes the Tigershark as "the culmination of the Hellcat's evolutionary path". Many also claim that the final sequence of Episode 3, "Glory of Sivar", includes Hellcat parts in a debris field -- this would indicate that whatever the fighter is, it is in active service and could be found among the Tiger's Claw's complement. 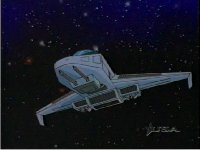