The Wing Commander Academy TV series has always been lauded for its proper use of 'early' designs like Scimitars, original Dralthi and Broadsword bombers... but the animators also managed to sneak in several Wing Commander III and IV ships! Over the next several days we'll take a look at four of these cameos and briefly discuss what they mean to the greater Wing Commander universe.

Our first ship is the Arrow V-class Light Fighter, which appears very briefly in Episode 1, "Red and Blue". The traitor, Burroughs, uses an Arrow to make his escape to a Kilrathi blockade runner. The 'V' designation occasionally referenced in fan circles (indicating that it is the fifth spaceframe named Arrow) comes from the Kilrathi Saga manual. This episode is the earliest appearance of the Arrow in the Wing Commander timeline, though the ship list which first introduced the fighter in Voices of War is curiously dated 2654. The Arrow is on its way out by the time of Prophecy; that game's official guide says of the Piranha that "the military is using it as a replacement for the out-of-date Arrow". 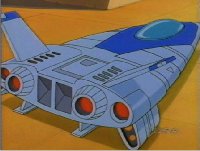