There's a couple new images that show off the latest with Last Line of Defense. The first is an updated graphic highlighting the vertical launch system featured in the mod. It's a pretty good battle action shot as well. Deathsnake has also arranged all of the game's ships side-by-side in a massive comparison shot. Both the Behemoth and Hvar'kann have been shrunk down for framerate purposes. It's pretty cool to see everything spread out like this! 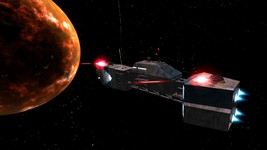 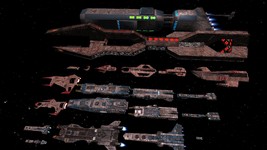 Here is the last ship with the VLS missile launcher. The Caernavon frigate is outgunned by the Ralarrad destroyer and even by the Kamrani corvette. I put here only one turret inside. It fire 2 VLS. With this firepower it is more powerful then the Kamrani and when the Ralarrad is not close enough, the Caernavon's VLS destroys the destroyer.

The Savannah, Talahassee and the Gettysburg have enough firepower with their AMG guns, but the frigate was outgunned for its class. I am building on another hull of a Talahassee to create a missile-only cruiser. The idea is from the Wing Commander Online project. It is not in the mod, because it's too overpowered, but it's a idea how Confeds forces can be gunned in the future beyond Prophecy.

Electronic Arts has been laying out its latest strategy in a recent series of calls and announcements. Joystiq quoted the company's CEO in regards to the current three-point plan:

For fiscal 2012 and beyond, the three pillars of EA's business growth are IP: "building roughly twelve franchises into year-round businesses across a range of platforms, packaged goods, and digital," Platform, "building a solid ecosystem for leveraging our content and services, focusing on our own platform, Origin, while supporting our retail partners," and, finally, Talent: "investing in our creative and engineering talent to drive and maintain our IP across multiple platforms from console to social and PC to mobile."

The company is also significantly boosting its Austin presence in the coming years. BioWare Austin's office will be growing by approximately 30 people in the next year, and this could eventually grow to 300 people working on a variety of EA projects.

EA Sports COO Daryl Holt told Joystiq "I think we'll probably start this first year somewhere around 30-35, just to get the team up and moving, just so they can start building features and working on HD platform development." He said the team could grow "exponentially, however we want," into new IP and "live services." EA has yet to decide which franchises to put the new Austin team onto.