In honor of today's release of EA Replay, which features the SNES ports of Wing Commander and The Secret Missions, we're collecting as much information as possible about the original versions of those games in this special super-sized update! Enjoy, and remember to pick up your Replay as soon as possible.

One of the first thing that eagle-eyed WingNuts should notice about WC on the PSP is the apparent lack of the distinctive Jalthi-class Heavy Fighter. Due to the extensive memory limitations of the SNES cartridge, the Jalthi artwork was removed from the game... instead, the game reuses the Salthi artwork, tinting it green to mark the difference between the light fighter and the six-shooter. Mindscape went all out in perpetuating this change -- the manual doubles up the Claw Marks line art for the ship. When The Secret Missions was developed, they even painted a 'green Salthi' for the cover artwork -- engaged in battle with a Hornet. (Read More) 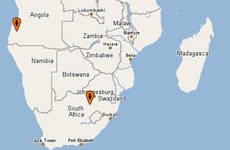 There's no place like home! But thanks to the SNES port, we're not quite sure where that is for Captain Joseph "Knight" Khumalo. For reasons unknown, the updated Wing Commander SNES manual changes his hometown from Kroonstad, South Africa to Lubango, Angola. Fans will notice a few other changes in the dialogue, including the switching of the "Blue Devils" squadron to the "Blue Angles". Political correctness run amuck, or an attempt to connect the Tiger's Claw to a real American military tradition? (Read More)

We need more power! Nintendo Power, that is. Nintendo's official magazine was very supportive of the SNES releases in the 1990s, promoting them with all sorts of positive reviews and original artwork. One issue included a Wing Commander 'trading card'... and another published a Wing Commander edition of the magazine's ongoing "Nester's Adventures" comic strip! The humor is, perhaps, not the greatest -- but it does feature remarkably accurate drawings of Hornets, Rapiers, Dralthi and Krant! (Read More)

The rest of the world loved the games, too! In this review, respected GamePro Magazine was entirely positive about The Secret Missions -- going so far as to call it "top notch". Not bad for a port of a game released three years earlier for the PC which contains few graphical changes from the previous SNES release! The article also features some simple tips and tricks for new pilots -- worth a look, if WC PSP is driving you crazy. One change -- while SM is the second game, it isn't Wing Commander 2! (Read More)

We need more time! And thanks to the SuperFamicom version of Wing Commander, we have it. The Japanese release of Wing Commander SNES features a full color manual which adds some interesting pieces of continuity to the classic Claw Marks timeline. Luckily, a well versed Wing Nut was able to translate it for us! Consider this example: "2646.005 - Starting with Baird's Star, seven systems declare independence from the Confederation. Confed attempts to break the stalemate and prevent other worlds from seceding by changing their strategic aims from direct engagement to intelligent, particularly in cryptography." Pictured here is the full color Vega Sector map included with the SFC WC1 -- amazing stuff! (Read More)

That isn't the only amazing thing added by the SNES port in Japan... just look at those stunning box art, which faithfully renders a Gratha, a Dralthi and a former Fralthi in combat with Confederation fighters. This was the first in a series of highly detailed Japanese Wing Commander paintings, which included similarly accurate scenes for the covers of Wing Commander and Wing Commander II for the FM Towns. (Read More)

... and there's even more from Japan! SFC Wing Commander's manual also features full color sketches of all the Tiger's Claw pilots! Ever wanted to see a 'manga style' version of Iceman? No? Well, you can anyway! You can find the entire set in our 'Head Museum' here.

But the Japanese Wing Commander SNES box wasn't the only one with new artwork! Look carefully at this picture -- while it's similar to the original Wing Commander artwork, it's actually an entirely new drawing in a rather different style! (See the Back)

We don't know how Wing Commander for the PSP will deal with the manuals -- including fourteen manuals in a tiny PSP case would be pretty darned tough, though. Luckily, we have a full text version of the Wing Commander manual here! We also have single page quick guides that were included when people rented each of the games, for Wing Commander SNES and The Secret Missions SNES available! Failing that, you can experience a crash course in the controls alone here. 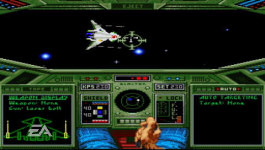 Cats got you down? Well, it just so happens that there are cheats for both SNES Wing Commanders. Presumably these codes will also work for the PSP release. To access the debug menu in Wing Commander: "Press B, A, B, Y, B, Y, L, A, R, A, Start at the title screen. " And in The Secret Missions: "Hold L + Rf + Select + Start on controller two and press Start on controller one at the title screen.". 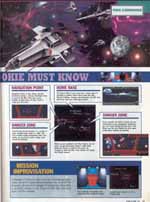 Nintendo Power did right by The Secret Missions, too -- going so far as to generate an entirely new painting... featuring many, many Ventures! That's not unprecedented. Because of the same space limitations that hurt the Jalthi, the Venture is used to replace the Exeter in the second game. The dialogue is changed to reflect this -- pilots will almost immediately stumble upon a conversation about the lost Venture-class TCS Gwenhyvar. This massive four-page article also features incredibly in-depth piloting techniques, similar to those which might appear in a large Wing Commander manual -- well worth a look for cadets or veterans! (Read More) 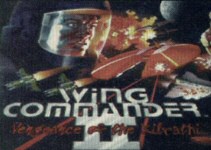 Unfortunately, EA Replay is missing one Wing Commander game for the SNES. In early 1995, Origin completed development of Wing Commander II: Vengeance of the Kilrathi for the SNES. It was a bold game, done independant of the Mindscape produced ports two years earlier... it adapted the entire Wing Commander II storyline, meshed with a new action-oriented combat engine. Unfortunately, in 1995 the SNES was at the end of its life-cycle, and the game was shipped off to Japan never to be released. To this day, no known prototypes of WC2 SNES have been found -- but the game features updated graphics (including color VDUs!) and a uniquely different take on the WC2 gameplay. We've informed EA that this game exists, and hopefully they might be able to track down a copy in their vaults for a future retro set. In addition to sadly missing Wing Commander II, Origin actually developed several other SNES titles which could be included in a future 'Replay' package. These include Ultima VI, Ultma Runes of Virtue 2, Worlds of Ultima: Savage Empire and Metal Morph -- the last of which actually reuses quite a few graphics from Wing Commander: Privateer! (Read More and More)

Remember that Wing Commander and The Secret Missions aren't the only Origin games in the EA Relay collection... it also includes the SNES port of Ultima VII! Wing Commander fans know 'The Black Gate' as the Ultima game which includes a Kilrathi Bloodfang fighter. I asked the game's lead developer if the fighter was included in the port... he said that, unfortunately there wasn't enough spare memory to include the image. SNES cartridges strike again! (Read More). 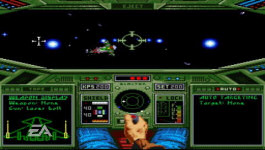 Apparently there's a fun in-joke in The Secret Missions -- but it probably won't be possible to access it using EA Replay. Better dig out your Super Nintendos -- here's the instructions, straight from the game's producer: "... we had a pretty funny backdoor in SM. On the title screen press the two shoulder buttons along with the START & SELECT buttons simultaneously and you should see an alternate opening (some of the jokes may be lost on you, as they were specific to the people working at Mindscape at the time.)". Great stuff!

That was quite an update! We'll leave you with one final present -- an original Wing Commander SNES advertisement! These were published in a media blitz which rivals Wing Commander IV for the largest WC promotion. Copies appeared on magazines, comic books and elsewhere to promote the game's release.

We hope you've enjoyed this walk through memory lane -- and that you'll enjoy EA Replay... it's certainly what the CIC Staff will be doing!