Children of the nineties such as myself may remember back when Nintendo Power was full of awful SNES game related comic strips... what you may have forgotten (or blocked from your mind) was that back then Wing Commander and The Secret Missions were Nintendo games! This comic is scanned from a 1992 issue of the magazine. Lost part of the Wing Commander canon or an excuse to stab your own eyes out and scream in terror? You decide! 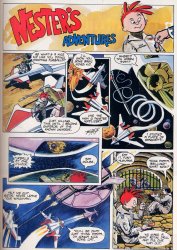