Exarch has taken a little bit of time off of working on Wing Commander Apocalypse to bring you this wallpaper. Apocalypse is currently the most active WC mod for the Nexus engine, and a number of ships have already been converted for use in the project. The wallpaper shows a Midway class carrier and a Fralthi II class destroyer taking on a Nephilim Tiamat dreadnought. Although the scene was rendered with Lightwave and not in game, it makes use of the models and high-resolution textures that will be used in the game. 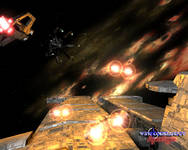 Fans are also anxious to get their hands on some sort of playable release. Exarch has posed two options for this. Hit the discuss link below to tell him what you think.

I'm going to give you all a choice on what you want for the first release. Basically, you have two choices. I wanted to ask you which you would prefer the most.

Option 1: I can reasonably add in most if not all ships planned for the mod, complete with proper weapon loadouts and most everything else. However, I would leave the high resolution textures out of the mod, except the ones I've already completed. While you guys are having fun with the mod, I'll be working on updating the rest of the textures for a future release. This would maximize the gameplay experience, but minimize the graphical quality on the first release.

Option 2: I continue doing what I am now and add in a few more ships complete with their new textures. This would ensure everything looks like it fits together, but at the same time, it may not be as fun to play as the first option.