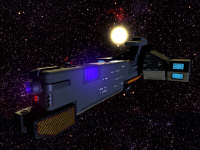 It looks like Wing Commander fans have quite a wide assortment of favorite Destroyers. The ships in the six most prominent Wing Commander games each got about one-sixth of the vote. The Valiant and Achilles class Destroyers from Action Stations and Academy didn't fare too well, but the Coventry type ship from Wing Commander 3 edged out the good old Exeter slightly.

The new poll asks which episode of Wing Commander Academy is your favorite. Our alternate layout lets you pick from all thirteen shows. Here's a little refresher to help you decide.