How To Watch Wing Commander Academy

By now, you're probably knee-deep in High-Res Wing Commander Academy downloads... and you're probably asking yourself, what order should I watch these episodes in? The question isn't as easy as it seems... as there are three distinct schools of thought!

Airdate: This is the order in which Academy originally aired on the USA Network in 1996. The show was run Saturday mornings at 11:30 AM (except for "Recreation", which was shown at noon) and then rerun on Sundays at the same time (the Oct. 26th showing was a rerun).

Timeline: This is the order in which the series occurs within the context of the Wing Commander universe. It's noticably different, but probably best for watching the show in order... as, for instance, Chain of Command references the events of Expendable. Stardates are rough, and could be within a few days off in each case.

Production: Last, and probably least, is the production order. There's no real reason to watch the show in the order in which it was made (as animated shows are generally produced out of order), but it's an important historical footnote! 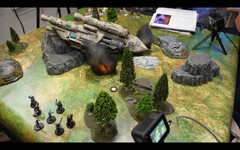