Adm_Maverick has mocked up a neat 'pilot console' for his Wing Commander tabletop game. He's built a template for the variety of fighter status that a ship would want to track, and it's been paired with a simple peg counter system so everything is neatly tracked. In the future, it could even be modified to hold the miniature ship and any associated cards. Something like this would even be pretty neat for the official WC CCG too! 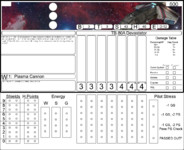 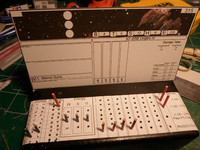 I had posted a design idea for the pilot console the other day. Well I spent a decent amount of time cutting and drilling and came up with a sort of prototype of the pilot console. It's not perfect, and still nowhere near what I envision when I try to market the game, but then again at this point I'm nowhere near that stage anyway. This is just for alpha testing of gameplay mechanics.

The design is such that it's intended to allow you to track the information on each fighter at a glance. So no 'calculations' or references. Just counting... mostly. For most items on the pilot console, it's just a matter of how many pegs you have in that section. 2 pegs in missile slot 1 means you have 2 missiles in that slot.

The only sections that are different are the shields and hull points section. Because some ships have upwards of 50 shields or hull points, the console needs to be able to account for that range. But have 2 groups of 50 pegs would make it rather difficult to see what you have at a glance. So the idea here is that you have 2 columns of numbers, running 0-9. A peg in the first column represents the 10's, while a peg in the second column represents the 1's. So a peg in 1(10) and a peg in 2(1) under shields means the ship current has 12 shield points.

Like I said, it's not 'final' but for play testing purposes it works. When I get to a point of marketing this game, I'm hoping to make the pilot console a storage item as well. So you can store your ship model, base, pilot card, ship card, and pegs in the pilot console itself meaning you only have this one block to store rather then several items.