gr1mre4per has officially announced the exciting Vision Engine upgrade that DefianceIndustries teased last week. The project removes many of the hard limits in Prophecy and Secret Ops so that fan mods can take advantage of modern hardware and capabilities. It's initially designed to work with the WCSO model upgrade pack, but it has the potential to enhance other mods as well. Additional features will be incorporated over time, but check out a sample below!

Hi All, as you may have seen in DefianceIndustries' WCP:MUP thread I have been working on extending or removing some of the upper limits in the Vision engine.

It all started when I seen that DefianceIndustries was working on high definition models and slicing them in to parts to stay within Visions mesh detail limits. This method, although ingenious, has some issues, especially when working with cap ships, so I decided to try and find out why the game crashes when models are too detailed. After finding the cause and creating a fix I decided to expand to other limits that are hit when pushing the engine.

The idea is this dll can be used in new or existing mods to enhance the experience. The dll is compatible with Prophecy, Secret Ops CD and Secret Ops web release. Let me know if you are interested. 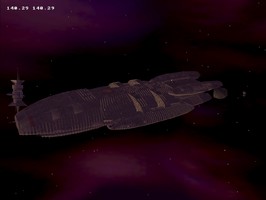 So far this is what I have: The intention is to continue to develop this patch, not only to extend limits as they're found, but to be able to modify options via the config file that were previously not configurable through IFF files. Ideas and suggestions welcome. Here's an image of what this patch is able to do:

Special thanks to HCl for his dll patching tutorial and DefianceIndustries for helping with early teething problems with the dll.