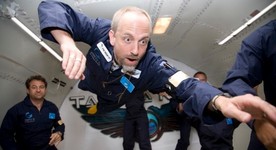 There's a new interview with Richard Garriott, and while Lord British spends a considerable amount of time these days working on the commercialization of space, this article is centered on gaming. The Q&A has some great insight into the thought process that brought about Ultima Online and refined it during the first few years. The discussion even mentions how Lord British recommended Wing Commander Online take priority over UO2. Although development on WCO and Privateer Online was begun and UO is still going thirteen years later, ultimately Origin never properly recovered from this rushed transition to MMO games. Check out the full interview at Massively here.

If Ultima Online 2 hadn't been canceled and you were still part of the project, what would you have liked seen done with the title.

Ooh, complicated question. When we did Ultima Online, the team said that the game was a living, breathing entity that would continue to grow and evolve. So our advice to our publisher at the time was to do Wing Commander Online or Crusader Online, but not Ultima Online 2. By starting UO2 immediately, we had to have every feature that was in Ultima Online already, which was a moving target. But we were told to start UO2, and we knew that it was going to be bigger and take longer and require more and more money. As we predicted before we started, people eventually got tired of the ever-expanding scope and canceled it.