Today we have a third entry in a recent string of articles dug up by the X-Wing Game Series Twitter account. This is another "state of the space sim genre" type of spread, which was a recurring theme at the time. It's interesting to see what they had to say at this point in time while the franchise was really still in its early days. Most of these types of pieces would hit on the usual suspects: Wing Commander, X-Wing and Elite plus a few of the newer novel entrants. Although this actually predates Wing Commander 3, even the original few WC games were known for their cinematic qualities. The caption to the WC image is "Wing Commander brought the movies to your PC." Also, what's up with the weird three-pip Picard on top?! 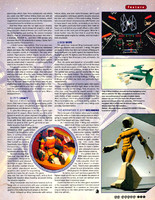 Far more exciting than Epic ever was was Wing Commander, designed by Chris Roberts and released by Origin in 1990. This was a pure all-action combat simulation which abandoned vector graphics and opted for expanding sprites to create the 3D visuals. The gameplay was fast and fun blasting stuff, with a Buck Roger-ish storyline about invading cat people linking the missions together.