The Origin history book Through the Moongate, from Wing Commander and Ultima VII to Portalarium now has a back cover! In his December update, author Andrea Contato shared an initial preview of artist Manda's conceptual draft. This will also be featured on the project's awesome cloth art piece. The cloth was included at the €110 tier, but may be available as a €30 extra as inventory allows by contacting Mr. Contato. There's still a lot of work to go, but it prominently features a Kilrathi warrior looking down on a couple of Ultima characters. There's also a Dralthi in the corner, which happens to be the movie's distinct KF-100 variant. I was sold by Denis Loubet's bookmark, but this WC art on the cover will be a nice bonus! 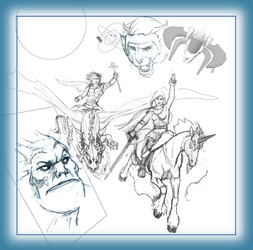 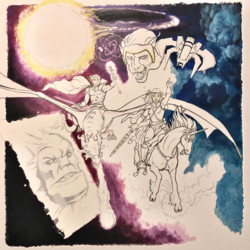 Working with Illustrator allows me to form a composition from the elements that I want. This painting combines elements from two key Origin "franchises": the Ultima series, and the Wing Commander series. Two heroes have just escaped through the Moongate, from the Ultima universe, into that of Wing Commander. As a feline Kilrathi snarls at the sudden appearance of several bogeys, the Guardian rages at the Avatars' escape.

In a sense, I’m creating two paintings. The first is the back cover, and it will be cropped so that most of the solar flare won’t be shown. Much of the full version will be shown on the cloth poster.

In a previous post, I showed how I’m putting in the nearest-to-earth stars. The cloth version will be a map of sorts, as I’m labeling the stars. As an aid to astrogation, it won’t be especially useful. The arrangement of the stars is a three-dimensional thing. Still, the program from which I worked let me roll and tilt the display, and I took a 2D screen capture. The 3D view was heliocentric, i.e. Sol was always in the middle. So, there is one bit of info: the relative distance from Earth will be correct.