The final design for Origin veteran Denis Loubet's nifty Wing Commander bookmark has been revealed! Mr. Loubet explains how the Kilrathi is a blending of Thrakhath and the Emperor, which I think makes for a pretty provocative 'Young Emperor' look. The Confed pilot is similarly inspired by Bluehair. There were several different color combos cooked up, and the slightly sepia toned version is what was picked. If you missed the recently successful Kickstarter where this awesome goodie was offered, there's still another way to secure one for yourself. Although they're not making the bookmarks available later as a standalone (we asked!), it's still possible to pledge for the hard cover version of the book at a supplemental IndieGoGo page here. 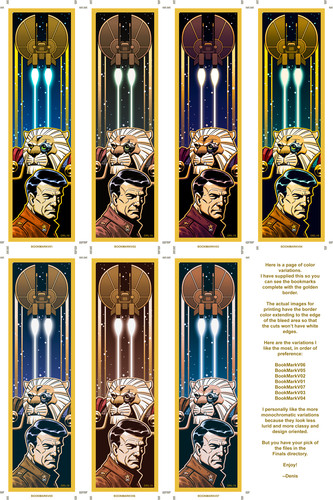 For this illustration I've mashed up visual elements of Prince Thrakath and the Emperor as the enemy looming over Bluehair. And the classic lines of the Dralthi just had to be at the top and in your face. The final bookmark will be 2x7 inches on a thick stock. I wanted a die-cut edge following the curve of the Dralthi wings, but that proposition was too expensive, alas.

We have some exciting news for you. Denis Loubet just sent us the final assets for the bookmark and we are not disappointed. Here is a preview of the bookmark. Please note that there is an extra 1/8" bleed along the border for trimming so the border on the actual bookmarks won't be that thick.

All backers who pledged for a tier with the hardcover copy of Part 2, will receive this beautiful bookmark. You made this happen, so again we say thank you.

Did you miss out and want to ensure you get this beautiful bookmark? If you are a backer of KS with the ebook or softcover edition, you still can upgrade your pledge and get the hardcover. If you missed KS completely, there are still a very few numbered and limited unsold rewards for sale in IndieGogo Indemand that include both this bookmark and Manda's artwork printed on cloth.