One year ago, Piranha Games launched Transverse, a space sim MMO title being bankrolled by a crowdfunding campaign. The game was controversial due to issues with the company's other major MMO, MechWarrior Online, and eventually the project was shut down before completion. The entire affair was interesting to Wing Commander fans since the game was at one time pitched as a new Wing Commander title. Apparently there were some discussions with EA to license a new chapter in the series, but ultimately this didn't pan out. Some of the game's concept art was based on WC history, including equipment named after Confederation favorites and enemy fighters that resembled the Dralthi. New images recently posted by concept artist Viona Halim reveal that one of the main fighters was intended to be the "Epee" at one point. Addition screenshots of the ship and of the game's central bar area are posted below. You can read more about the project's art background at Viona's gallery page here. 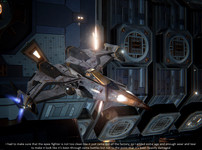 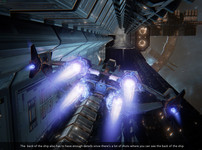 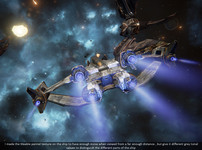 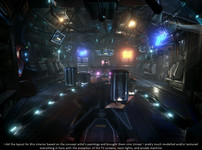 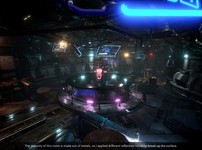 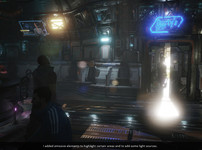 The launch video for Transverse was done using Unreal 4, which is the first time that I had to work with PBR lighting. The short amount of time that we had to finish the video didn't allow for an in-depth R&D with the engine and the new lighting method. Nonetheless, we were able to work as a team to produce and ship a pretty good looking end-product, in my opinion. Not to mention the opportunity to work on something different than what I normally do as an environment artist, which in this case, making cool-looking spaceships.