WingOver has created a modified version of delMar and UnnamedCharacter's Secret Missions 1.5 package that is designed to run with Kilrathi Saga. DOS versions of the early games have seen a huge resurgence over the last several years with the popularity of GOG and DOSBox, but many pilots prefer the enhancements that came along with the Windows editions released in 1996. Now these players have a chance to try out the extra missions that are included with Super Wing Commander (back ported to the original game engine). First, back up your install.dat in the KS gamedat folder (and make sure your KS install includes The Secret Missions already). Then unzip the contents of this file (60 k zip) into gamedat. It includes a new install.dat that will replace Secret Missions 2. You can flip back and forth between iterations of the file to choose which campaign you want to play. If you'd like to give this a try on your DOS-based WC1 install, grab that version of the patch here.

This is about bringing the Secret Missions 2 campaign from Super Wing Commander and 3DO, known as Secret Missions 1.5, to the PC. For a start, I'll just make the files available here that have been converted 1:1 from the 3DO version. That's possible due to the awesome work of UnnamedCharacter and many others who paved the way. The zip file contains a readme file with all necessary information and instructions. 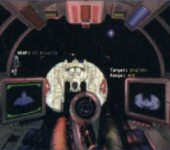