Sounding Off About Obscure Sound Cards

LOAF was catching up on some early '90s issues of CGW this morning and came across several sound card advertisements that exemplify the times. It's been many years since people have had to spend much thought on the particular sound card for their new PC, but back in 1992, the market was on fire. Over just a couple short years, the industry converted from simple beeps & boops to dynamic music and digitized speech. Wing Commander 1&2 were at the forefront of this revolution and so were often highlighted in various ads such as these. To underscore the fact that this was largely a new thing for people, all of the hardware mentioned here came with free speakers. And when we got a pair of cheap 3-inch speakers, we actually used them!

Everyone's familiar with the Sound Blasters and AdLibs of the day, but the boards pictured below were not quite as popular. Despite branding itself as the "new affordable P.C. sound standard," the Sound Commander failed to make a lasting mark on the industry. The Sound Runner was out there "conquering the final frontier of truly realistic ear-blasting sound" and claimed to be the most compatible PC sound card with support for over 100 games! Finally, the Sound Galaxy NX was billed as "the only PC sound card you will ever need." It was the only sound card that supported four different competing standards: the Sound Blaster, AdLib, Disney Sound Source and Covox Speech Thing! Apparently it did not support the Sound Commander standard. 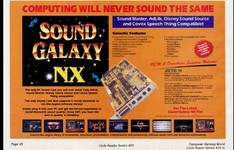