Forums member Falcon988 spotted a review of Wing Commander II: Vengeance of the Kilrathi in the November '91 issue of Computer Gaming World. The overwhelmingly positive review concludes with the author's ideas and hopes for future sequels, a lot of which actually made into Wing 3 and Wing 4. Well worth a read. 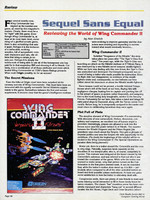 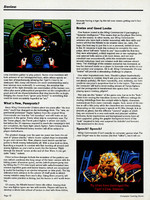 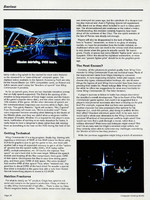 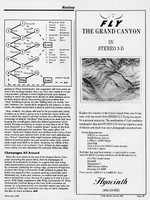 Wing Commander II is a big program. Really big. Starting with requiring a minimum of 583K of free RAM (more for those using EGA-level graphics) just to get the game to run, one must add another half a meg of expanded memory to get in all the "optional" goodies like the speech buffer (64K), VCR replay buffer (64K), cockpit animations, etc. Of course, the copious "free space" on one's hard disk is the next target. Without the speech module and keeping all the files compressed, there goes 10MB of disk space. Uncompress the files to save time during game play, and there goes 15MB of disk space. The voice module? Add another 6MB of disk space! Thus, when "maxxed out," say good-bye to about 21MB of the hard drive! No wonder a special blue sheet is included in the game box from with a note from Robert Garriott [sic] beseeching players to invest in CD-ROM!

This issue of CGW is a 10th anniversary issue with a long spread on the history of computer games (mentioning Richard Garriott and Chris Roberts) and game of the year awards (praising Ultima 7: Savage Empire). Other highlights include Cardinal of the Kremlin and Leisure Suit Larry 5. Check it out here. Update made possible by the excellent CGW Museum. 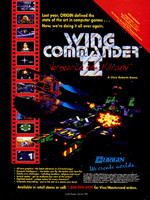 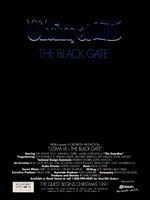 Amazon.com has joined other retailers in pre-shipping Wing Commander for Blu-ray. Theirs are scheduled to arrived first, on Tuesday 8/6, but some lucky Wingnuts could even get theirs today. Has anyone's copy arrived yet?


In the US, prices have been competitively whittled down to about $13, but the Canadian numbers are even better. Worf pointed out that Best Buy has lowered their price to $9.99 with a limited time 10% discount. Amazon.ca has gone even further and is now just $8.99. What a deal!