Underappreciated Dorkir Recognized as a Winner

After handling Confederation logistics with a gorgeous Drayman, Klavs has turned to the Kilrathi supply chain. The Dorkir is rendered below in both tanker and transport variants. It's really interesting to see the design similarities between this ship and the Drayman. Although we later go on to see freighters in all sorts of shapes and sizes, WC1's workhorse 'sports both have a "head" module with a drooping bow and modular containers aft. It might seem odd to spend so much time focusing on transports, but as the Kilrathi recollection below reminds us, logistics win wars! 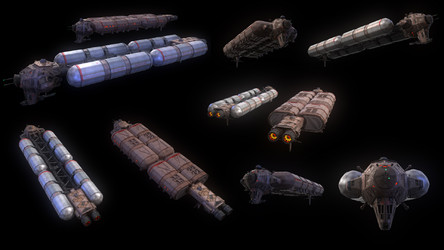 There are many great songs un-written and un-sung regarding the lowly wagon driver, plowshare, shipwright, supply officer and transport captain.

Only the elites fought the space war, the hundreds of thousands of nobles, barons, princes, second royal cousins twice removed- all too frequently scorned those in transport and supply. Theirs was the world of power, battles, and glory. Ours was the world of service. Humility and humiliation combined. Many warriors relegated to logistics were so tempted by Zu'kara that the priestesses issued an edict that those in supply were forbidden to practice the right. They worked hard to convince us that we were serving Sivar in our own way, but we knew the words were hollow. If Sivar was truly the way, why would he deny so many of his willing faithful the chance to do as he required?

Only the leaders who had risen from dust and obscurity on nothing but merit- only they respected us and used us correctly. But they were always too few. The pampered fools who perpetuated the war to stay in power knew nothing about actually winning them.

And so the war was not won.