Klavs has put together his take on the stalwart classic Drayman transport. It's fine to have plenty of fearsome warships in your fleet, but logistics is what keeps them fighting. We've seen the ship reconfigured before as the Diligent class tanker, but there's another fun variant depicted here as well. Additional cargo modules have been attached to the rear of the ship to form a "train" behind the main vessel. Each section is connected via umbilicals and there's even an extra engine pod on the back pushing all that bulk. Very clever! On top of the pretty pictures, Klavs has also prepared a story below about a spirited encounter between a Drayman and some unsuspecting Kilrathi raiders. 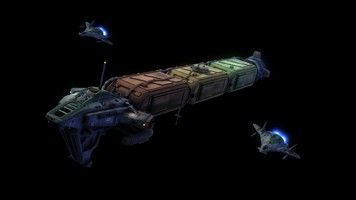 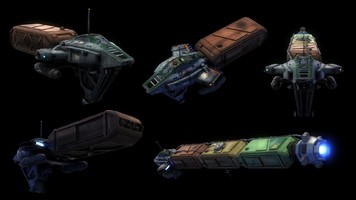 We had gone to 125% on the impulse pods, hoping to give us the delta to make the jump before the raider could close with us. Looking at the numbers now, it was obvious that he would overtake us long before that, all we could was burn out the reactor. Even if we burned all our propellant, there was still no way.

The crew were all looking to me, wide eyed. I felt a knotted, sick feeling in my stomach. Knowing it was just a matter of time, I ordered impulse zero and hoped. We coasted along, watching the range readout grow smaller and smaller.

At fifty kilometers he still hadn't fired, and I breathed a sigh of thanks. The raider swung around in front of us and closed to three clicks. No radio calls were necessary. It was obvious what they wanted. I ordered Sellers to drop the shields. Bless her, she only hesitated for a second before doing it.

Eight bulky figures dropped out of the raider and spread out. Spacesuits sporting heavy weapons. A Kilrathi, grinning through his armored faceplate, floated directly over the bridge window, brandishing a gigantic cannon.

I gave the order.

In a heartbeat we had severed the connections to the cargo modules and shunted power to the impulse engines. Raj vented propellant into the reactors and we were at full burn an instant later. I looked up to note the surprised look on the Kilrathi's face and then we were well past him.

Freed of tons and tons of cargo, the Joliet exploded into high velocity like the musclebound ox she was. We bore down on the raider as he writhed udner our bow, trying to manuver out of the way. The last thing I remember was seeing the light show as the shields shorted out.

When I woke up, I was in the rec-room, bathed in red emergency lighting. Sellers was floating over me, laughing. It made me laugh too. I laughed until tears stung my eyes and refused to float away.

The first thing I ordered after we all quit crying was a damage report. The Joliet had a broken nose, the first ten meters of her bow flattened like she'd been hit with a frying pan. It was a miracle none of the bridge crew had been crushed.

But the Drayman's stocky construction had paid off, the ship stove in around the bridge crumple zone and the aft bulkhead and door to the bridge was still intact. Sellers, the only one still conscious after the impact, had gotten us all out before we'd asphyxiated.

The raider was a million clicks astern and trying to recover his scattered EVA team. His shields were out and he didn't appear to be maneuvering. The Joliet, apart from needing a nose job and a new set of keel spars, was still under power.

My eyes settled on Henrietta's zero gee litter box module, still safely velcro'd to the aft wall of the rec-room. 'Come about,' I ordered. 'And bring me all the kitty litter you can find.'