Workhorse Faldari Gets the Scooby Treatment

ScoobyDoo has put together a new fighter, and once again it comes from the ranks of Tri-System ships that are underrepresented in the universe of fan modeling. This one's based on the Faldari, and after closer inspection, it might appear to be different from the heavy fighter that many of us flew in Privateer 2. That's because - in addition to the civilian Faldari Mk II - there was also a Military CIS Faldari that sported sleeker lines and engine nacelles! There's also a new center-mounted gun added to Scooby's version that gives the ship a little bit of a Banshee vibe. He's arranged some neat side-by-side shots below to show how some of the detailed elements were built up on the new vessel compared with the original. 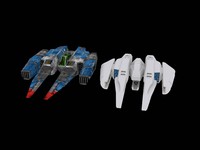 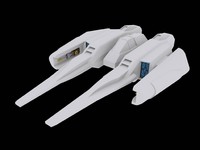 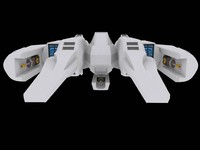 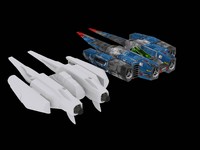 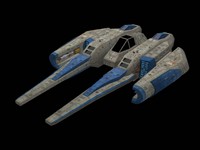 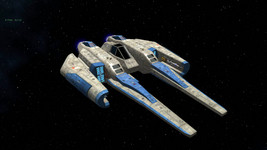 The Faldari is a mid-range heavy fighter available on the private market in the Tri-System. It is a civilian version of the military's ML2B Faldari-class Medium Fighter. The design was followed by the ML3A Faldari MK II, a significantly cost-reduced design.

One of the Tri-System's most well known pilots, Lerissa du Voille, flies the Faldari. Other noted Faldari pilots include Louissa Phillips, daughter of Hendri Phillips, and Melissa Banks, on again off again girlfriend of Vel Ricaud. Less reputable mercenaries frequently fly Faldari: four of the fighters defended The Buckaroo Boys, a murderous band.