Roberts Space Industries has a couple interesting new articles on its website so far this week. Meet Martin Galway kicks off a series of features on the Cloud Imperium Games team currently working on Star Citizen. Mr. Galway has a extensive history in game audio, including roles as sound director on a number of Wing Commander games. He has also worked on classic Commodore 64 titles, many different Origin games, the Star/Freelancer titles and the WC Movie.

After a few years at Ocean Software carving out his legendary status as Commodore 64 musician,Martin came to Austin in 1988 as a contractor, to help develop Times of Lore; two years later he returned permanently to take a job as Origin Systems’ Audio Director. From then on he was responsible for increasingly complex audio projects including sound effects, music and, as the Soundblaster took the market by storm, speech. Sharp-eared Wing Commander fans may recognize his voice as a Kilrathi in the original Wing Commander II demo! Martin’s audio work at Origin would go on to be an instrumental part of Strike Commander, Wing Commander III, Wing Commander IV and others. He headed up content creation on Origin’s first CDROM game, a port of “Ultima 6″ to Fujitsu’s FM-Towns PC. To hold all the digital speech samples for the game, Martin’s PC had the largest hard drive in the building at that time - a whopping 320MB. 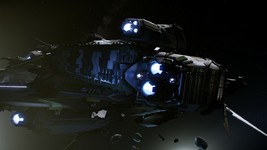 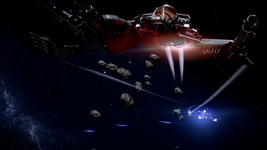 RSI has also published details on potential enhancements that may be coming to RSI's ongoing funding campaign. A poll has been set up to gauge people's interest. There are some neat options! Check them all out here (note the poll may have technical issues at this time - check back later to cast you vote).

More smaller “addons” like the electroskin – we threw in the “double pledge” electroskin when we started Kickstarter as a cheap way to reward users who perhaps had a Kickstarter account but had already backed us through the main site. There was some worry that it might seem like we were taking advantage of your generosity… but the users have spoken and they love the skin! Would you like to see more small addon options in this same class?

Naming rights for star systems, ships, etc. – this is something a lot of crowdfunding campaigns do with their higher tiers an which we have shied away from. Do you want to spend money to name planets and bases in Star Citizen?

Shirts! – the reason we created the “Citizen Card” reward was because we thought users might be tired of the standard ‘backer’ shirts that come with nearly every Kickstarter. But from the comments it sounds like shirts are a beloved tradition and we may have missed the mark switching the for the cards. What do you think?

The pledge drive is now just a few thousand shy of crossing $1.8 million!

For those who aren't familiar with how to navigate Reddit, Chris Roberts' responses to yesterdays Q&A session are available here. A few highlights are also quoted below:

CommanderRoberts: WC1 & WC3 are tied for different reasons. WC1 is probably the most perfect game I'e ever made in terms of matching the vision in my head to what the finished game was. WC3 is my other favorite as its where I think we perfected the combining the story with the action i a big cinematic way.

Nilef: Will there be "boarding parties"? I loved that element in Battlefront II. Also, can you tell us more about the use of spacestations? Will there be vacant spaceships or stations that you can salvage from? Imagine if squatter communities eventually formed inside a stripped, dormant spacestation :O

CommanderRoberts: Yes there will be boarding parties in both Squadron 42 SP game and Star Citizen's persistent universe. You'll be able to capture bigger ships, or perhaps an asteroid base or space station.

Rhystic1: Chris, Privateer is one of my favorite games of all time. How much of that awesomeness will be integrated into your new project? (I've already "backed" the project on Kickstart by the way :P)

CommanderRoberts: All of it (other than the WC universe IP that is :-( ) Think of Star Citizen as Super Privateer + next gen Wing Commander

mprey: Care to share a few thoughts on your experiences in the film industry? How do you see the Wing Commander film, and how did you get to co-producing films like Lord of War? Are you still involved in the industry or strictly focusing on your new game now?

CommanderRoberts: Its been a fun 10 years in the film industry and I've made some films I'm proud of like Lord of War and Lucky Number Slevin. I wasn't happy with how the Wing Commander turned out - it didn't match the picture I saw in my head - which is unusual for me, but I think it was down to my inexperience as a first time director, having a deal making vs a film making producer, a ridiculous short pre-production time (2 months!) and a low budget ($20M) for a complicated sci-fi film. There's still some parts of it that I thin are very well done, but if made that film again today t would be 10x better

I'm giving film a break for now and am fully focused on building SC as it represents everything I love about games or movies - universe building!