The latest Roberts Space Industries posting is a concept art drawing of the Kilrathi Comcon from the Wing Commander Movie. There's also some background information on what else the ship was used for in the film. The Thrak'hra class design is very eye-catching, and it's certainly one of the most imposing reconnaissance craft out there. It even seems to share quite a bit of style in common with kat ships from the games. You can find more early sketches of the Comcon in our archives here - the final design is much closer to today's sketch than the original storyboards. 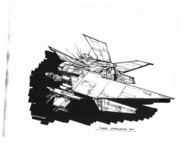 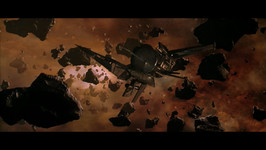 In the original movie as shot, the concom is the setting for the film’s climactic showdown, a knife fight between Blair, Gerald and a Pilgrim traitor revealed to be Admiral Wilson of Pegasus station. Test audiences found the reveal confusing and Wilson’s role was removed from the finished movie.