Amazon.com has posted new box art for the upcoming Wing Commander Academy DVD set! The updated image adds the Tiger's Claw and replaces the red background planet with a blue nebula. A (mirrored) Scimitar still tangles with a pair of classic Dralthi.

Release is just six weeks away, and preorder prices are continuing to fluctuate. Deep Discount has increased its price about a dollar to $17.84. Shipping is free at DD, but Amazon Prime members get free release date delivery included with their $19.99 purchase. Many other retailers, such as Overstock.com, DVD Empire, Books-a-Million, CD Universe and RightStuf to name a few, are now on board with a proper product listing. Barnes & Noble has an impressively low online price of $16.62, but the lowest we've seen is $14.43 at Blowitoutahere.com. Buyer beware at some of the smaller sites - most of my copies are preordered at Amazon. 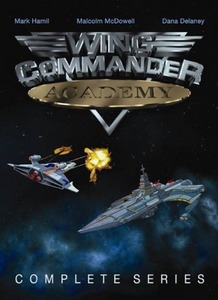 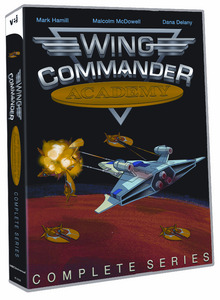