Challenger has made great progress on his Midway model. New building material has allowed him to add more detail, and he's coated the ship with a layer of paint. Not all elements are complete, but the ship seems nearly ready for its shakedown cruise! 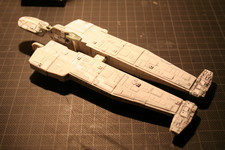 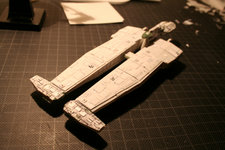 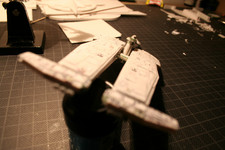 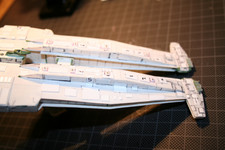 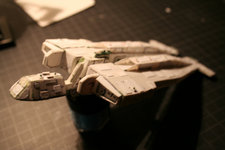 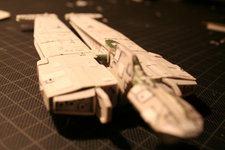 "Incoming Piranhas, this is the TCS Midway ^^"

After 3 weeks I finally got the stupid polystyrene and added a few greebles. This weekend I painted the carrier. Here the results. The blue part on the front isn't finished yet.

Darkstar One Headed to XBox 360

Darkstar One has been announced for the XBox 360. This is potentially very exciting news for Wingnuts, as no company has taken the big space sim plunge on major consoles in a number of years. DSO is very often compared to Wing Commander, specifically Privateer, and was reviewed quite well when it was released for PCs in 2006. If the game can successfully splash down on modern consoles, it could spark the genre for a large new audience. Team XBox has posted a preview, and they are similarly interested in the prospects here. The enhanced console version of the game will be subtitled 'Broken Alliance'. It's expected for release in the third quarter of this year. 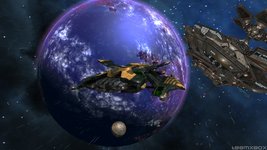 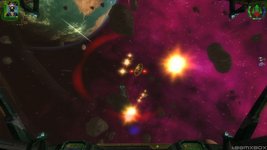 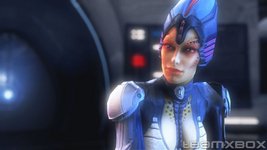 Well, that’s good news then for Xbox 360 gamers who will get to play the game for themselves this Summer. We could use a good old fashioned spacecraft-based shooter, one cut from the same fabric (of space and time?) as classic games like Wing Commander, Privateer or Freelancer. All of those games let you unleash your inner Han Solo, piloting your own personal space ship around the galaxy, engaging enemy craft like a World War II dog-fighter or transporting goods like an interstellar tramp steamer. It’s a well established genre, though one that’s been almost exclusive to PC’s. DarkStar One – Broken Alliance should bring that classic form of space-trading opera to Xbox 360 gamers for the first time.

With a 30 hour storyline, countless more hours of side missions and resource trading and 40 minutes of rendered cut scenes, DarkStar One – Broken Alliance looks like it will be a sufficiently meaty experience for gamers, with plenty of stuff to do. Despite the ship upgrades, exploration options and a reputation system that should add an extra layer to the experience, it’s probably not right to call DarkStar One – Broken Alliance an RPG. But it’s a lot more than a simple space-combat game where you’re shooting down one enemy ship after another. Whether or not the story and presentation of the game will truly grab a hold of Xbox 360 gamers remains to be seen, but if the promise of full 1080p graphics running at ultra-smooth 60 frames per second comes true, that could be a big selling point. The game is slated for release this Summer, and hopefully we’ll get to spend more time exploring the game’s missions and side-quests before then. As for now, all we know is that we can expect a solid space-shooter, a genre that’s more than welcome on the Xbox 360.