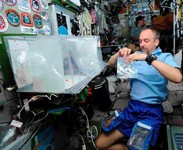 The Examiner has done an interview with Origin founder Richard Garriott and his extensive views and experienced with space. Garriott has a lot of particular insight, not the least of which was gathered during his recent trip to the International Space Station. He's obviously very excited to be discussing the topic. Check out the full article here.

Steven Andrew: When did you first decide you were going to go into space?

Richard Garriott (RG): I can't remember ever not thinking it. I grew up in Houston, just outside NASA's Johnson Space Center. My father, Owen Garriot, spent 60 days on Skylab in 1973 and another ten days on a Spacelab in 1983, my next door neighbor was Space Shuttle astronaut Robert "Hoot" Gibson. So I grew up thinking this is normal, that's just what people did, they built rockets and flew into space.

SA: Would you do it again?

RG: Not only would I do it again, I am going to do it again. This is what I do. I and several other high technology business people are investing big in commercial space, establishing incentives for engineers and students to try their hand at coming up with better designs. We're designing a new generation of rockets, labs, and planning the first permanent settlements in space and on the moon or Mars.

Answer this: Suppose I told you that you could go to Mars but there's one catch -- it's a one way trip. You can go there, and when you get there you'll be able to live, there will be shelter, air and food, and power; but no coming back. This is actually a realistic question, because, getting to Mars, as challenging as that is, due to orbital mechanics, the dynamic relationship between an outer and inner planet, is a lot easier in terms of the duration of the trip and the fuel and other supplies required, than getting back. When I ask that question to a group of people, the answers usually come back half and half. Half say no, but half say yes. There's no doubt in my mind that some of the people who say yes mean it.