Way back in June, 2006, former Wing Commander author Dr. William Forstchen announced that he was preparing to publish a modern apocalyptic novel called One Second After. It looks like that book is finally making its way out -- it now has an Amazon listing, a release date (March, 2009) and a description: 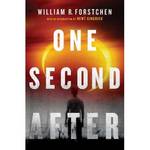 This is the Star*Soldier gloss for the first pilots page:

CONCEPT: One thing Wing Commander games have always (well, often) had is a roster of particular 'ace' pilots. Even when it isn't printed in the manual, it's in the game (Rakti, Kur, etc.) It was a no-brainer when I was expanding the manual... except there wasn't anything like that in the game. There was a big list of names that it would randomly assign to an AI and nothing more. I picked a few pilots from the database and write six or eight bios... and was then contacted by the development team, who liked the idea and decided to 'lock' a handful of character names to particular ships. I had to double the number of bios I'd written, which was easy for Terran but no so comfortable for Kilrathi. My rare impact on how the game is actually played (this is also why these particular names show up so often - their spawn rate is a lot higher for whatever reason)!

Beyond that - I'm a Wing Commander fan and not a graphic artist, so one sort of tribute I wanted to include was to seamlessly (which is to say while ignoring the elephant in the room) include multiple Wing Commander styles in the manual. I wanted live actors and drawings and talking heads coexisting and for the booklet to act like there was absolutely no problem with them all appearing together. I think this section was especially well accepted by casual fans, since it's neat to see the talking heads again... (ahh! I'm hitting myself for not including a Super Wing Commander shot right now.)

Note that there is a surprising amount of gameplay in these pages - the callsigns all appear in the game, the kills all match up with the real in-game leaderboards... with some effort you can actually get to the top of this list (six or so people already have).