By popular request, here's the original "human" fighter designed for an early concept of Wing Commander Arena which would have included all new ships. Note the line running along the top of the wing - the design was to include wide-tracking guns which could move back and forth along this bar. 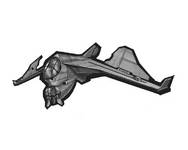