Someone over at EA is working the Thanksgiving break, and they've posted an interview with Command & Conquer 3's cinematics director. The company appears to be taking the game's live action FMV component very seriously, and we're all interested to see how it turns out. A couple of new photographs from the set have been released, and they reveal a wonderful mix of detailed physical sets combined with areas marked for green-screen CGI. 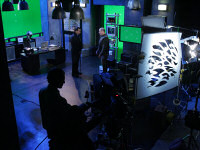 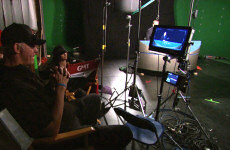 A: There are a lot of things we're doing to improve the storytelling in C&C 3. First we have a script that has a lot more intricate and interesting human interaction, more emotion. Also there's a more complex storyline running throughout the game...

Surely they mean "introduced story-telling in video games through Full Motion Videos" to the franchise. Wing Commander 3 sported a wider range of CGI environments and arrived nearly a year before the first C&C game. And here's another interesting quote.

Q: Why do you think live action videos were the right fit to tell the story in C&C 3?

A: First of all this franchise has a tradition of live action sequences for the cut scene material, but to me the most important thing is the believability and the emotional impact the player feels when a real human being looks you in the eye.