Sorry for the super last minute heads-up, but Wildfire just noticed that the Wing Commander movie will be showing at 11 pm tonight in the US. Good luck trying to catch it if you read this in time.

Renewed Interest in the CCG Online

A number of people at Crius, organized by XJ from Casper Station, have come up with a new solution for making the original Wing Commander Customizable Card Game playable online. Rather than create an application from the ground up as we attempted several years ago, they will be using premade ccg module engines now available. They need a lot of help translating the cards into a format the program can use, so check out Crius here if you think you can help.

A Closer Look at the X: BTF Sequel

Tye was poking around gaming sites the other day and came across more information on the sequel to X: Beyond the Frontier. The original was a somewhat average space sim in its day, and I hadn't given much though to its new incarnation. Some aspects of X2 look really good however. Cockpits are nice and sleek and some of the ships are decent. And it wouldn't be complete without some big Nephilim-looking alien ships mixed in. You can find more on X2 here. We first highlighted some similarities between this game and Prophecy a few weeks ago. 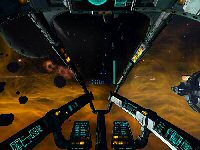 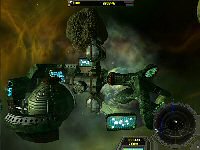 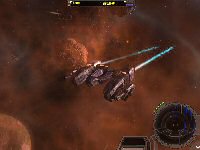 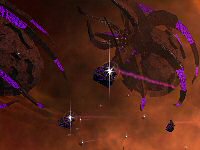 Tye also dug up an older GameSpy interview with the developers that compares aspects of it to Wing Commander.

Wing Commander is a good example. Players who liked those games will feel at home with the control system and flight model instantly, although mouse, keyboard and joystick are all supported and the plot will take them on an exciting adventure.

You can find this interview here. It's a good read for miscellaneous background info on the game.

On second thought, when was the last time anyone heard from the Energizer Bunny? Anyhow, I meant to mention this last week when we hit a hundred, but now is just as good a time as any. With the launch of Prophecy Advance giving us a little boost, we've updated every day consecutively for 106 days now. Thanks for visiting and reading all this stuff. Here's hoping for another hundred.