TC spotted that Inside Gamer has reviewed Prophecy GBA, but since it is in Dutch, we had to wait for Kris to translate it for us. According to Kris, the review starts with a summary of earlier WC games (I'm wondering what Klingons and Taliban have to do with the earlier games. That's as much of the introduction as I can read except for the screenshot comments which are in English for some reason). The reviewer thinks that there is a bit too much reading in the game, it should have had a tutorial for people unfamiliar with space sims and that it has a weak soundtrack. On the plus side, he also thinks the gameplay is great, graphics are great, explosions are great, and sounds are good. Overall, he says it is the best game he has played so far this year so he gave the game an overall score of 80%. You can read the entire review (in Dutch) here.

Have You Seen Vega Strike Lately?

Instead of artwork, how about some screenshots for a change? These screenshots were taken from Vega Strike, a game based on Wing Commander. Privateer ships never looked so good. 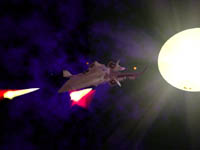 Memories From DragonCon, 52 Days To Go

In this shot LOAF and WildWeasel commandeer a random table. Unfortunately the authorities came to remove them before long. It wasn't the last table we lost at the convention.

Comments:
Byydo: There's something distinctly David Lynch-ian about this scene. Are they un-drinking the water?
Weasel: LOAF and I commandeered a table and held our own Wing Commander panel. Then some guy came by and told us to leave.
ChrisReid: I was really nervous someone would come and do that. But after that we sure did get a nice space on the floor next to some pillar.
LOAF: Damn, my vest is cool.
Joe: LOAF keeps the Gin flowing, as Weasel berates the the other attendees.
ChrisReid: And yes, Weasel's neck is broken.