The previous reports have proven true: Prophecy GBA is out in the UK. We haven't heard of it being available in other countries at this time and Take 2 Germany is quoting a July 11 release date, so perhaps the rest of Europe won't follow until that date. Read on for a comparison of the European version.

It felt really great to be able to walk in to a store and buy a Wing Commander product. Today I picked up a copy of the UK release of Prophecy GBA. Naturally the first thing I did was find out how it differed from the US version. The answer is: not much.

Today is exactly one month from Prophecy's launch in the US. To celebrate.. have an easter egg! You know the nice tactical database in the Midway's rec room with the spinning ships and ship statistics? What if you could also view alien ships in that? Well, you can! Here's how:

When you first turn on the game and you get the Prophecy splash screen and the flashing text "Press Start", press the following button sequence:

The screen will flash white quickly to let you know that it worked. Then just go to the Midway's rec room and access the tactical database as usual. Stay tuned for a couple of cheats which we'll release somewhen over the next six weeks. We're holding those a bit longer since the game has only just been released in some areas and we'd like to give people a chance to play through properly first.

It's More Than A Cat In A Hat

Up first for today we've got a fan art submission by Rob Roberts. It's a little wonky, so I'll let him describe it.

I'm a WC fan who just stumbled across your site. I made this pic in Paintbrush (hard-core), influenced by WC. Not featuring any neccessarily identifiable ships, the style is similar.

I see some sort of Kilrathi manual in there, though my take is that it looks like Hobbes in a Ferret. It could be a fighter in the background.. though it looks a bunch like a Gilgamesh Destroyer. You can actually find more of his artwork here. 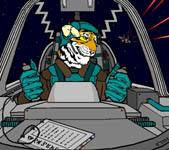