ChanceKell noticed that Wing Commander will be showing on the Sci-Fi Channel in the US tonight at 6:00 PM.

Just thought you guys would want to know that the SciFi Channel is playing their slightly edited version of the Wing Commander motion picture at 6:00 PM Eastern tonight (Friday). Since it's in the early evening time slot, it'll probably be the pan and scan version.

You can find their schedule here.

Ack, for those who've waited too long, it looks like Amazon.com's Prophecy Advance has gone back up to $29.99. At this point the K-Mart $27.99 price point seems to be the cheapest if it's still current. If anyone else finds some legitimate places with cheaper prices let us know. Good thing I already snagged a bunch for the Birthday.

EA's Earth & Beyond just held its first fan gathering. UO has had a couple similar Fanfest and Luncheon gatherings, and E&B appears to have reached this important community milestone. The daylong event was held in San Jose, California and featured game oriented discussions, competitions and prizes. Machines were set up to log into the E&B universe and some who could not attend in person were present through the monitors. You can read the full writeup here. You can read about our own annual Wing Commander Fan Gathering here.

Earth & Beyond's First Ever Fan Gathering was held on May 24th, and was a successful event with lots of chats and discussions, prize giveaways, and a surprising amount of logged gameplay. The first attendee arrived onsite at 6am and the last attendees remained far later than the 8pm scheduled ending. 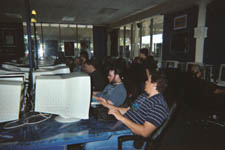 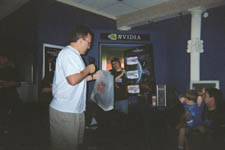 E&B fans come from thousands of miles away to sit next to each other and play E&B (left). Executive Producer Craig hands out prizes (right).

In related massively multiplayer news, UO's price is going up. Although Everquest and the like may have eclipsed it in recent years, UO was the first modern MMORPG, and as such it retained its $9.99 monthly price tag over the years. Since then even less "massive" games have featured prices in the $12.99 monthly range. After the better part of a decade now (seems like yesterday that ace got into the Beta), their pricing structure is changing.

The Ultima Online monthly service rate will change from $9.95 per month to $12.99 per month on June 25, 2003. At the same time, we’re also introducing the following two multi-month discount packages, which will be available on June 25th:
3 Month Prepaid Discount Package — $34.99
6 Month Prepaid Discount Package — $59.99
By choosing our new 6-month discount package, you can keep your monthly rate at $9.99 per month — maintaining your rate where it is right now!

It seems kinda weird to be that excited about keeping the monthly rate the same. I always feel a nostalgic when I see the Origin logo on the box with each UO release.

Wing Commander creator Chris Roberts' brother, Erin Roberts, was interviewed for the June 11 GameStop circular. The article focuses on Brute Force, Digital Anvil's latest game, but Erin's bio predominantly focuses on his Wing Commander history. Although Chris often gets a lot of the fame, Erin was actually a major force in Wing Commander and Privateer, and he was the executive producer of Privateer 2. On the subject of Brute Force, I've found it to be quite an enjoyable game. It's probably in my XBox top five, and I'm very anxious to system link up several systems for cooperative multiplayer.

Erin Roberts started his career in 1987 working at Origin Systems in Austin, Texas. He worked on titles such as Wing Commander, Strike Commander and Privateer. In 1993 Erin transferred to Electronic Arts UK where he prodiced Privateer 2: The Darkening.

Note that Privateer 1 actually came out in 1993. P2 was a few years later.