Origin's cancelled Prowler project was not a Wing Commander game; it was an Origin game developed for consoles by a group who would go on to do great things in the Wing Commander universe. Never the less, the CIC is the unofficial guardian of Prowler history, thanks to artist Sean Murphy's history of the project. As such, we're excited to announce that the box art developed for the game (the later Playstation version) has been discovered!

Sketches of Characters, Mechs and Locations 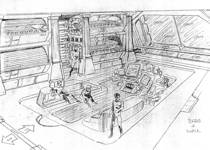 
Veteran Wing Commander artist Sean Murphy has some memories to share with us... about a game not many people have heard of. In 1995-6 Origin developed Prowler, a 3D mech game for the 3DO Interactive Multiplayer and later Sony Playstation consoles. It wasn't a Wing Commander game, but it was certainly for the same audience -- sci fi combat in a distant future. Unfortunately, Prowler didn't make it -- it lasted all the way to E3, where it was shown next to another lost game, Wing Commander III Saturn. Sean was nice enough to scan a boatload of original sketches and to write up an article explaining his involvement in the project. 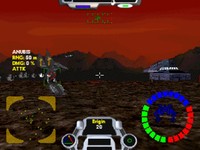 
Prowler was a mech combat game that some of the Super Wing Commander team worked on in the mid '90s. It never saw the light of day, so there's not much info out there, but the CIC has archived the game's box art, concept sketches and back story. It looks pretty dated today, and these are still pre-release shots from early in development, but this had the potential to be another neat Origin sci-fi series along the lines of MechWarrior.