"Beyond the eyes of my enemy, I shall prepare for the day of his destruction." Wing Commander Invasion's latest ship is the imposing but unassuming Kilrathi Comcon from the Movie. It's a support ship that fills an important surveillance role in the game. Players who deploy the sneaky craft will have a major sensory advantage over the Confederation. Download version 2.0 of this WC mod for Star Wars: Empire at War here! 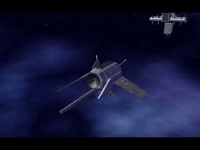 As you already know, the Confeds have the Pelican repairal tender. The Comcon has a dual purpose. Firstly, it has the ability to use a "sensor ping" anywhere on the map. This sensor ping will last for about 30 seconds and reveals a limited sized area. Secondly, this ship also has a much larger "field of view" and will clear the Fog of War to a much better distance than ANY other ship in the game. It is also limited to being constructed 3 times in any game.