The Fine Line Between Trash and Treasure

This is a sad tale -- with a happy ending. Some months ago Kotaku ran an update about our Wing Commander I blueprint scans. This prompted an anonymous EA employee to respond in the comments page that his division had just thrown out boxes of old Origin games and shipped other material away. He included some photos: 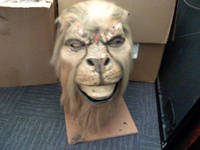 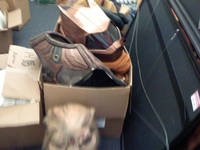 Prince Thrakhath himself, plus his helmet and armor! Unwanted and abandoned? Possibly thrown out? We were heartbroken -- he belongs in a museum. We rushed into action -- contacts at EA tried to find out what had happened, friends in the industry listened to us crying and so forth. No luck... until, a month later the props surfaced again at EA Mythic in Virginia. The helmet appeared here, in a short cell phone camera video documenting the development of Warhammer Online. We've since confirmed that a large amount of EA's archived Origin material was shipped to Mythic... and that it's all safe and being cared for by people who appreciate its importance! Whew.