Behind the Screens: Prophecy GBA Script

Here's an unusual sort of developer document to archive -- one we actually created! As some of you may recall, the CIC staff helped advise Raylight on their ground-up GameBoy Advance port of Wing Commander Prophecy. One of our jobs was to create a gameflow script from the extracted video and comm video files in the PC version. To explain how the game worked we created a 'no frills' website that walked the developers through Prophecy one step at a time, listing all the dialogue, mission locations, events, etc. Because Raylight originally planned to render cutscenes in their 3D engine, we also went about the heartbreaking process of choosing roughly one third of the game's story which should be cut (marked in red in the document). Thankfully that never came to pass! You can read it in its original web format here. It's not only a historical curiosity... it's also great for finding bits and pieces of Prophecy's dialogue. 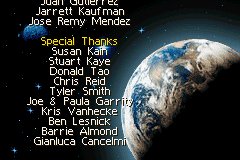