Hard To Pick Just One 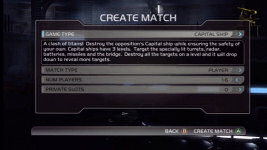 Today's new poll asks which upcoming multiplayer mode in Wing Commander Arena has you the most excited. It'll be interesting to see how these results compare with the numbers after the game has been released. Each mode has a unique map, and two levels (Boneyard & Space Station) allow both free-for-all and team play. Check out this interview with Arena's executive producer, Sean Penney, for details on each details on each mode included in the game.

Eurogamer: That might keep the players busy for quite a while. How does it look online? What variants can we expect?

Sean Penney: The multiplayer mode offers free-for-all for 16 players, team engagements with two crews with eight members each and duels between two individual pilots. The team portions take place between the Kilrathi and the Confederation. 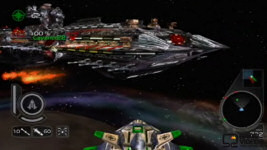 "Capital Ship" is the meeting of the Titans. The goal is to destroy the opposing battlecruiser and to protect your own at the same time. The capital ships consist in each case of three sections. One must destroy them successively, particularly their cannons, radar systems, generators, rockets and the bridge. If the player blows up all the goals on a level, the battlecruiser sinks one level deeper and offers new objects for pulverizing. The bridge comes at the end. Without a control center the ship breaks apart and you win.

With "Satellites" it plays as a variant of Capture the Flag on an interlocked map. You must dock with a satellite in order to conquer it for your team. If you leave it unguarded, it can be taken by the opposite side. You must mix ships, tactics as well as team play in order to be successful here.

"Boneyard" offers a beautiful environment with shipwrecks, astonishing crystal formations, dangerous terrain and a single planetoid where you can find hidden treasures. It can be played in both free-for-all and in team modes. 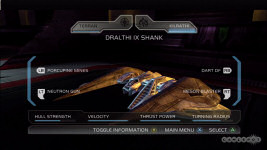 "Space Station" again puts the player - as the name implies - into an enormous space station. There you can lure enemies into dead ends, attack them from the corners or fly to open space. All the ships in an area can be damaged by destroying fuel tanks. The space station can also be played in either variant, free for all or team.

In "Bearpit" 16 players participate in duels. It involves a special map with an arena in the center. All participants first enter a queue. This surrounds a duel pit, which supplies the necessary points for the rank list. If you win a fight, you remain in the arena. The loser must re-enter the queue, while the next pilot may start his challenge. The beauty to it is that the queue covers the entire area outside the stage. There you can fly fun duels, complete mini-games and resupply yourself. If you want, there is even the possibility to dock with the arena and take a few shots at the two fighters.

"Duel" is a head to head fight between two players for the best three out of five possible battles. Whoever wins the first three victories also wins the match - like in tennis. Combat takes place in a smoking crater in which one finds hiding places and other surprises like pickups too.

Our last poll asked which ship you were most eager to fly. The Rapier II won by a good margin, and the Arrow, Broadsword and Dralthi IX each took around a sixth of the vote. I'm sure once more people get in the cockpit, the Darket and Paktahn will have their share of diehard fans too.