eddieb has released version 1.4 of the Flight Commander engine. It's designed to look and feel like Wing Commander while being easy to modify. Aspiring modders will find Flight Commander easier to work with than the Vision engine from Prophecy and Secret Ops. Here's a list of new features in this release:

Having a ship jump in is simple with the improved mission editor. Navigation points can have a name assigned to them, which should make it easier to tell them apart. 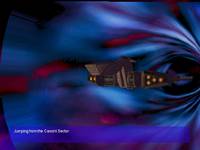 Flight Commander is a space combat game in the style of Wing Commander. The Flight Commander engine was programmed from the ground up, and comes with a graphical mission editor. It is designed to accomodate easy modding, using standard formats for images, sounds, and 3d graphics. All game stats can be changed easily with a text editor.

For the more advanced missions, scripting is done with the user-friendly but powerful lua scripting language. All scripting commands are well documented, and many examples are included for a variety of missions.