Composite Bengal Gets Some Teeth

Lars has continued to refine his unified Bengal design. After having incorporated Wing Commander Academy's side hangar bays, he has begun to detail the 40 missile and torpedo tubes shown in the Wing Commander movie. Inset defense turrets, various maintenance access hatches and stabilization thrusters are now also visible. More work on the turrets is coming soon. You can find the original batch of shots for this neat idea here. 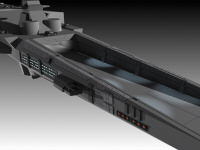 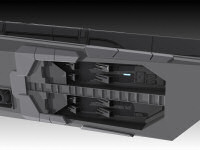 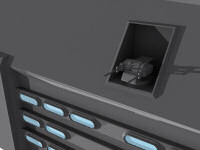 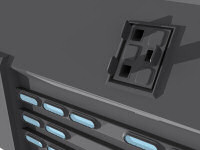 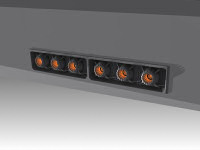 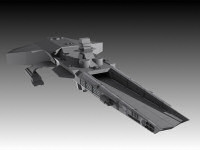 I finally found some time to work on the model again and so I added the torpedo tubes at the front. I have set a torpedo to a length of about 4.5m and 0.2m radius. Taking that size I could place 8 tubes at each side which makes 16 tubes in the front arc. The rest of the 40 tubes will be placed along the sides of the ship about the placement as in the movie.

The lauchers are normaly protected by blast doors. The pic shows the "open fire" position. Right in front of the torpedos is a little window, airlock and some maintance doors for quicker access to the tubes and thrusters if repairs are needed.