While searching his hard drive, Maj. Striker came across an image featuring the Raptor model he made earlier this year. The 1024x768 render depicts a wing of Raptors out on a morning patrol and would make a nice wallpaper for your desktop. Striker says he may produce some new 3D work soon as we haven't seen anything new from him since March. 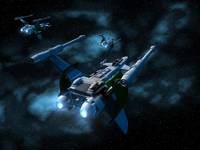