Tolwyn has posted a new desktop wallpaper based on material from WC Saga. The wallpaper depicts a wing of Hellcat Vs supporting a Confederation destroyer in an attack on a Kilrathi carrier group. The actual image was created by gevatter Lars, but Tolwyn has written a little story to go with the wallpaper. 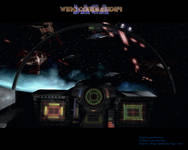 The cold vacuum of space has erupted into absolute chaos. Klaxons echo stridently across the flight deck, announcing the unexpected arrival of a Kilrathi strike force. The FORCAP fighters have already engaged the Kats and are taking losses, and enemy bombers have broken through the defensive line and are nearly within strike range. Time is of the essence. Footsteps ring against the deck, mingled with the urgent shouts of technicians making desperate final checks of the fighters.

The canopy of your Hellcat V slides into position and seals itself shut. Your VDU crackles, and the image of the comm officer clears you for takeoff. You jam your throttle forward and feel the acceleration slam you hard against your headrest. Your Hellcat streaks out of the fighter bay and you peel off towards the oncoming attackers.

You can read the full story in this thread, and you can get the 1280x1024 sized wallpaper by clicking the thumbnail above.