Occasionally we'll see a project with a whole bunch of work already done appear out of nowhere, and this is one of them. ZOmegaZ has posted version 0.5RC of a previously unknown project called PiArmada. PiArmada is a project to recreate Armada in Windows, and a two player version of the strategy element of the game is already complete. The project is by no means complete, and we look forward to seeing this one's progress, but for now you can download version 0.5RC here, and you can find the instructions and post your feedback here.

PiArmada is now a Sourceforge project, ready for open collaboration! It's written in Python, which is a very easy language to learn, whether you have programming experience or not. PiArmada is based on the Pi4x engine, and designed in part to test its capabilities. This engine is intended to be extremely flexible and extendable, meaning that we should eventually be able to extend the Armada concept in directions we could never take it before. Multiple empires, bigger universes, more capships, more ship classes, we'll only know the limits when we hit them. However, to do ANY of that, the project needs more help, specifically in the following areas:

Code: PiArmada will eventually implement a cleaner and more detailed interface, saved games, AI players, internet play, and integrated flight simulation with an existing open-source engine. Further extensions beyond the original Armada are definitely in mind, but not so clearly defined as yet. Ideas can be posted at Sourceforge. All the code is currently in Python. Anyone interested, say the word, sign up at the above site!

Graphics: New interface graphics are needed, as most of the ones we have now are made by me in about twelve seconds. Bob McDob made the sector level buttons and button backgrounds, which is why they look so much better than everything else! All graphics are in .PNG format, and exist in a separate, easily accessable folder included with the distribution download. If you want to redraw something, redraw it and send it in! It's that simple. More planet images would be especially nice, since I really don't know where I got the one I have, and the owner might well object for all I know.
Sound: PiArmada is now completely silent. Something as simple as button clicks would be wonderful, and any other interface sounds you think appropriate. Background music is also needed, so if you know of anything appropriate that is legally distributable, or can write anything, let us know. 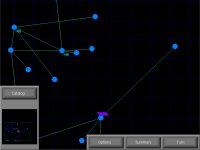