The latest Ultima Online expansion has been released. Samurai Empire adds the Ninja and Samurai classes and provides an exotic new continent to explore. After Origin closed, production of this game was moved to EA's primary California studio. I haven't seen an actual box yet, but if you preorder you get a paper with an access code for an exclusive in-game item. The preorder slip still features a prominent Origin logo. 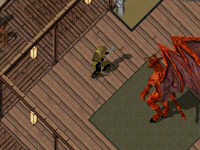 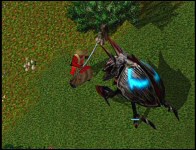 Launched in 1997, Ultima Online was a pioneer in the world of online gaming and defined the category of massively multiplayer Internet-based entertainment. It is still recognized as the one of the most immersive of any online world. Ultima Online is offered in six languages and is played in more than 100 countries located in every time zone. The game stands as the longest-running online subscription-based game in history.

The pictures are pretty dated now, but it's amazing the game is still going strong after all these years. It is still one of the most popular massively multiplayer games around.