Standoff Split In To Chunks

There has been a lot of progress on the Standoff mod lately and the team have made some big announcements - including that the mod will be released in 5 episodes, Secret Ops style. Here's the whole update from the Standoff site:

Prologue coming along - with screenshots!
Yeah, yeah, I know everybody loves screenshots, and everybody's probably already clicked the link to the screenshots page by now. Well, do come back here later, there's really interesting stuff to be read on this update, too! :-P We're making steady progress on the Prologue, and also on the first few missions of the main campaign. We should have a new launcher soon (Tango says he's almost done), with more user-configurable options, and we have found a few new voiceover actresses (thanks to Tempest and his friend Sphynx), which is a very good thing. The main thing we're waiting for now is the music - Michael has to do some live recording for our cutscene pieces, and he's also working on Standoff's theme, so these will still take some time. As for me, I've finished texturing Standoff's version of our new Stiletto model (the one which was released for the CIC's birthday), and done some work on a splash screen for the Prologue (there'll be more than just one, but we gotta keep some surprises ;-)). There's screenshots of both the Stiletto and the splash screen at the screenshots section. The Stiletto screenshots are all from an actual mission from the Prologue, hence the comms, wingmen names, etc. I believe they're also our first 32-bit screenshots, thanks to HCl and Tango's work.

We're going episodic on you!
Those of you who keep up with what goes on in the forum might have seen this coming for a while, but now it's official: Standoff is going to be released in 5 episodes instead of just the old Prologue/Campaign separation. All the content will remain the same... We've simply split the Campaign in 4 episodes to allow for smaller releases, but closer to each other, rather than having another long wait after the Prologue's release, and then releasing the whole Campaign at once.

A bit of re-organizing going on
As the prologue's release approaches, I've decided to reorganize the site a bit. I've moved last year's news to a separate page since this page was getting too big. The link's at the bottom of this page. Also, the Progress page has been somewhat revamped so that it's easier to spot what's left to do until the release of the next episode. I've split fiction, music, voiceovers, additional graphics, and comm videos between episodes, since these items will be added to each episode as they're needed (unlike, say, cockpit graphics, which will *all* be included in the Prologue's release, even though you don't get to fly all the ships in the prologue). The extra red squares may scare you at first, but rest assured, it's just a more detailed way of keeping you informed of our progress. It'll also force me to update this site more often, which should hopefully make y'all a bit more confident that we have indeed always been making progress, even when we didn't post a single update in eight weeks or something. :-P 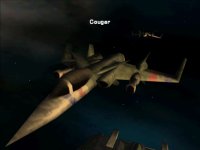 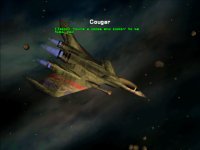 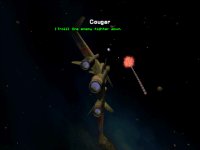 There's also a thread going over on the forums with a few more details and where you can post your own comments on the announcements here.