This is a ship with much the same role as the TCS Tarawa in the Wing Commander novels - moving fighters from one point to another. In "Walking Wounded" the Kilrathi capture the TCS Morgan and turn her fighter complement (Sabres and Broadswords) against the Tiger's Claw. The Morgan's fighter complement consisted of nineteen ships in two launch bays: eight Dralthi, six Sabres and three Broadswords. Defensive armament consists of three dual-mount laser turrets, one single-mount laser turret and a dual-mount missile turret. The design is similar, but notably distinct from, the Achilles-class ship seen in other episodes. 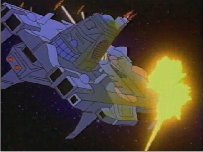