Next up we'll be identifying the ships created specifically for the animated series - from Confederation battleships to Kilrathi stealth fighters to unusual fighters no one has managed to conclusively identify! First up are the nine original ships of the Terran Confederation!

The TCS Manassas, a light cruiser, appears as part of Admiral Bergstrom's battlegroup in "Chain of Command." Unfortunately, we are never given a clear view of the ship -- so its complement and capacities remain largely unknown. 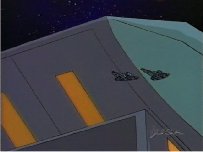