Ships of the Animated Series: Sartha

Wing Commander II's lightest fighter also shows up throughout the series: the Sartha-class Light Fighter. They first appear in episode two, and then are visible from episode seven through the end of the series. The animated Sartha carries a modest loadout: two laser cannons and two missiles in racks under the fuselage. 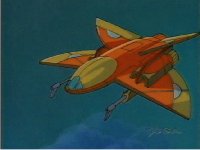