Continuing with our tradition of helping to promote Wing Commander-related auctions by Origin employees, we are proud to announce that Mike "Boomer" McCoy is selling a very special piece of memorabilia: 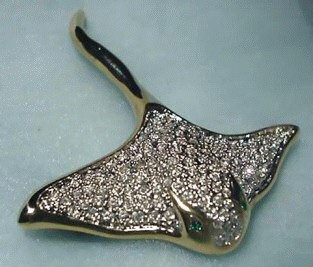 This diamond encrusted manta ray was commissioned by Boomer himself to promote Wing Commander: Prophecy at the 1997 E3 and CES trade shows. Valued at approximately $28,000 each, only seven hundred were made - all but one of which were distributed to journalists and store managers. Prophecy featured alien 'Manta-class' fighters designed by noted Sci Fi visionary Syd Mead -- so the tie-in is obvious. As thanks for posting this auction, Boomer has promised to give away the ending of Secret Ops again. (Current Bid: $5, 1 Day Left)